While I was vacuuming up some fur-based tumbleweeds around the house Sunday morning, I noticed that it seemed as if I’d stared too long into a light bulb. That misshapen blob that suggests light has seared an indelible purple smear into my vision until it eventually fades. “Huh, the bathroom lights must be brighter than I thought,” I thought to myself. I shrugged in annoyance and kept vacuuming.

But it didn’t go away. It didn’t fade. Confused, I tested by covering my right eye with my hand, and then the left. The discolored spot was only in my right eye. Worse, wherever I looked took on a pincushion effect, as if whatever I gazed upon was being sucked into a black hole, distorted, shrunken, and swirled. Given all of the warnings chanted to me by a ceaseless string of opticians, optometrists, and ophthalmologists, I immediately worried I was experiencing a retinal detachment.

Why would I worry about something that’s normally extremely rare? My eyes are bad. Awful. Terrible. You know that big E on the eye chart? If you can’t see that, your eyes are marked as -2.5 diopters. My eyes are around -14.5. Myopia is caused by the eye elongating and causing the visual image to fall short of the optic nerve, and in my case, my eyes are practically footballs.

That kind of stretching pulls the retina extremely thin, and as a result, raises the risk of it coming detached. Scared I was about to go blind, Jen and I called the local ophthalmologist, and her answering service suggested going to the local ER to make sure it wasn’t the worst case scenario. So we went.

After a bit of waiting, I was brought into the back room and given a quick triage. During this, they asked me to look at an eye chart, and even with my glasses on, I couldn’t make out the top line because the single letter E was engulfed in a thirsty black hole that distorted any sense of what the letter could have been. I knew it was the letter E, but I couldn’t see it; a far more important distinction.

So they called the ophthalmologist to get her opinion, and she actually agreed to come in on a Sunday to see me herself. Upon examination, she said it looked like the spot causing the distortion was “tenting” due to blood leaking between layers in my eye. So rather than retinal detachment, I’d incurred a wholly different malady: Myopic Macular Degeneration.

Based on what I’ve read, prescriptions as high as mine carry a roughly 95% or higher chance to experience this around middle age, and for similar reasons as retinal detachment. The bloated mass of the elongated eyeball requires extra vascularization, and these extra blood vessels are more likely to leak. It’s just a matter of when. 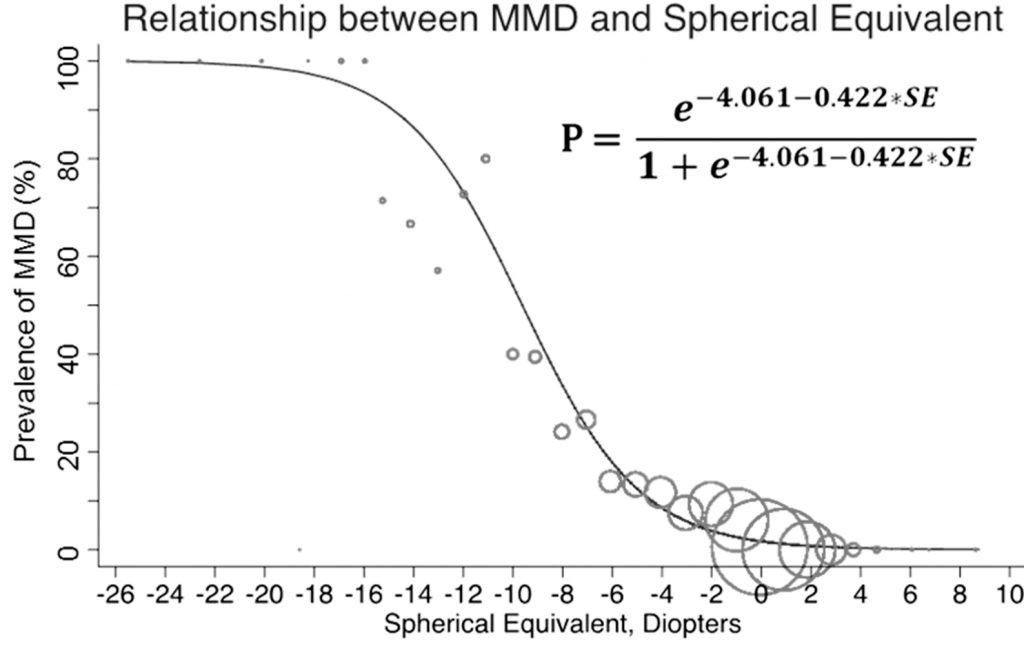 What I experienced on Sunday was merely my first symptom. So the ophthalmologist called a retinal specialist a couple hours away and conveyed my problem. He agreed to see me Monday afternoon, and so I went to bed unable to see through the middle of my right eye, hoping it wouldn’t get any worse by the time I saw him. I was also hoping this hadn’t progressed to a macular hole, because those require surgical intervention and carry a substantial decrease in visual acuity.

The visit itself was fairly uneventful. Apparently the doctor is extremely busy, and employed a kind of production line in his practice. One room for every major check, one person in each room at all times, patients in the waiting room until it’s their turn for one test or another. It was my “turn” about four times, until eventually he agreed that the tenting was being caused by blood between layers of my eye, and prescribed Anti-vascular endothelial growth factor (Anti-VEGF) therapy to prevent it from getting worse, and maybe eventually revert things back to some degree of normal.

That meant an injection of Avastin directly into my eye. Despite three applications of numbing drops and gels, I distinctly felt the puncture, and it left a dark black perfectly spherical hole near the bottom of my visual field. I can also see a few tiny bubbles where the injection disturbed my vitreous fluid. Still, if it works, it’s a small price to pay to avoid slowly going blind over the course of 3-5 years.

As of now I still have the visual warping distortion and it feels like I got punched in the eye by a particularly annoyed cat. I can barely read what I’m writing here, looking at the words obliquely so the dead spot in my visual field is temporarily displaced. I’m not sure how I’m going to be able to work long-term like this. It’s better than the alternative, but it’s hardly easy. I’m not even sure it’s viable long-term.

I see the retinal specialist in another five weeks, but I may have to ask him what I can actually expect so far as how well my right eye will be able to see when this is all over. Presumably the leaked blood will stop, and eventually be re-absorbed, but when? Can I expect any long-term issues from this occurrence? I’m going to be making a long list of questions for that appointment, especially if things haven’t cleared up by then.

What I find most odd is that every single eye doctor I’ve ever seen has warned me about retinal detachments, but not a single one mentioned MMD. Given the above chart, that seems patently ridiculous; I’m far more likely to experience MMD than retinal detachment (and sooner), even though I’m at high risk for both. What exactly happened there? Is it just that regular eye doctors don’t expect to see macular degeneration—a disease usually associated with older people—in younger populations?

Whatever the case, this is a new chapter in my life I was expecting, but hardly looking forward to. Here’s hoping it doesn’t interfere too much.